by 198 Nigeria News
in NIGERIA UNIVERSITIES
0

Poor leadership is one menace that has impeded the growth of Nigeria as a nation.

The effect of non-accountability of elected representatives in this part of the world is quite obvious in every sphere.

Political office holders in Nigeria have become nonchalant about delivering on campaign promises because the populace hardly hold them accountable.

Across the globe, development in advanced nations can be attributed to accountability of leaders to their people.

At this juncture, the question that comes to mind is what Nigerians can do to make elected representatives accountable?

READ ALSO ALERT: Nigerians Must Press For The Passage Of These 7 Bills Urgently

Highly inspiring is the bold step taken by a young Nigerian, who obviously feels saddened with the state of the nation and is desirous of changing the narrative.

Rather than merely whining like many do in their comfort zone, the undergraduate student appeal to the conscience of his state government on the importance of street lights on roads.

Inioluwa  Olaposi, a year 3 law student of Obafemi Awolowo University, Ile-Ife wrote a letter to the office of State Osun Commissioner for Works & Transport in February 8, 2021.

In this letter, he brought to the notice of the commissioner, the inoperativeness of street lights in a part of the state and stated the negative implication of same. 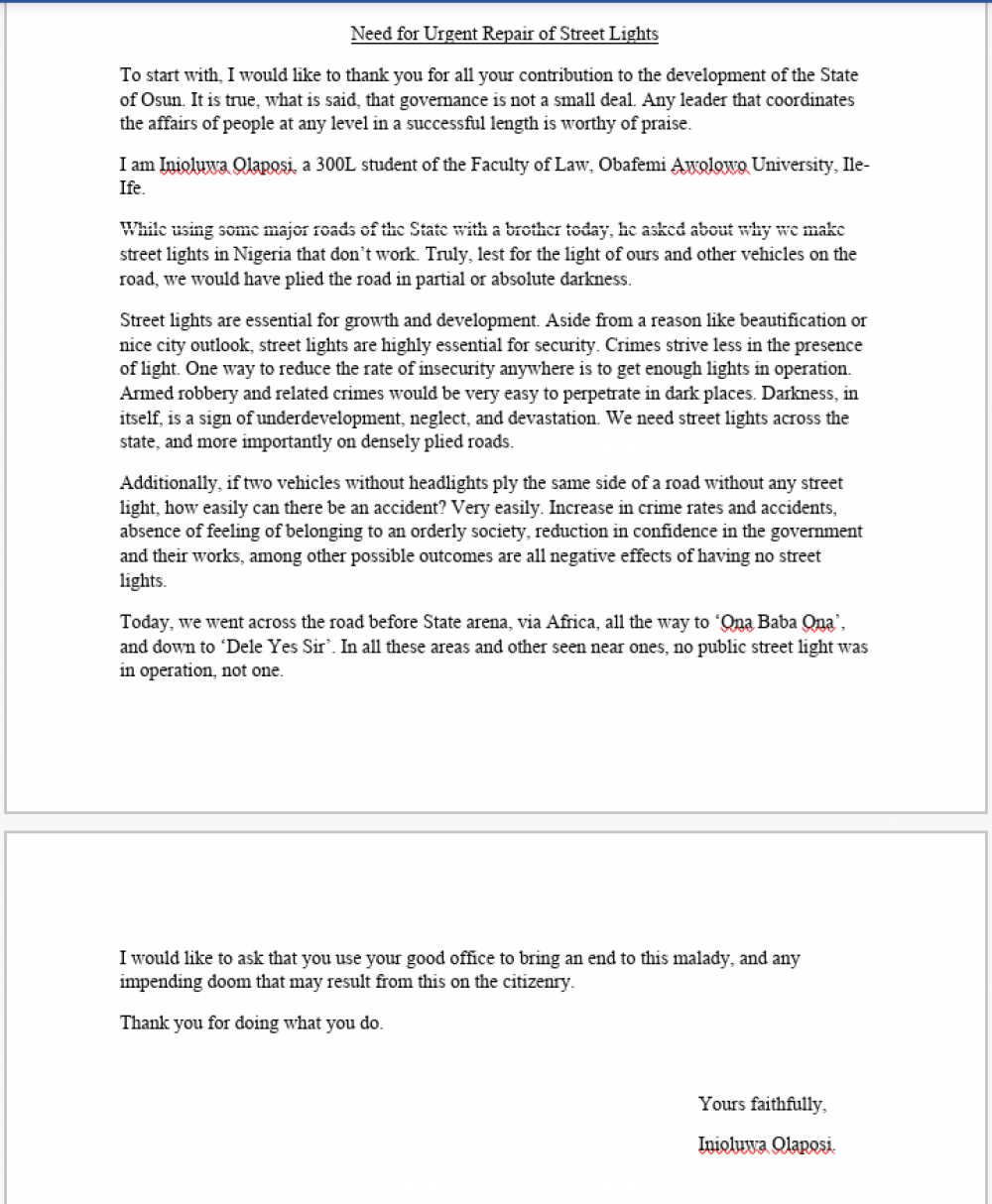 He also mentioned how the confidence of people in the government has dwindled over the years.

Barely two months after the letter was dispatched, a reply was sent by email to Olaposi by the department of Mechanical and Electrical, Ministry of Works and Transport, Osun State, Nigeria.

In the response, the ministry stated that illumination of roads is one of the priorities of Governor Gboyega Oyetola’s administration. with the code named ‘Light up Osun’. A project that has commenced in the state capital.

The ministry attributed the delay in executing the project in major towns and cities in the state to the outbreak of Covid-19 Pandemic and #ENDSARS protest, which according to them affected the economy of the state in 2020.

Olaposi was however assured that the project ‘Light Up Osun’ will resume as soon as the economy of the state is revived.

The ministry spelt out some areas including ‘Ona Baba Ona’ where the Street Lights are not functioning as a result of vandalization by men of the underworld and reckless drivers.

The ministry also promises that the Street Light along “Ona Baba Ona” would be restored within the shortest possible time.

By the letter, an appeal was made to Olaposi and other well meaning residents of Osun State to be vigilant and report any issue of vandalizism of Street Lightning components. 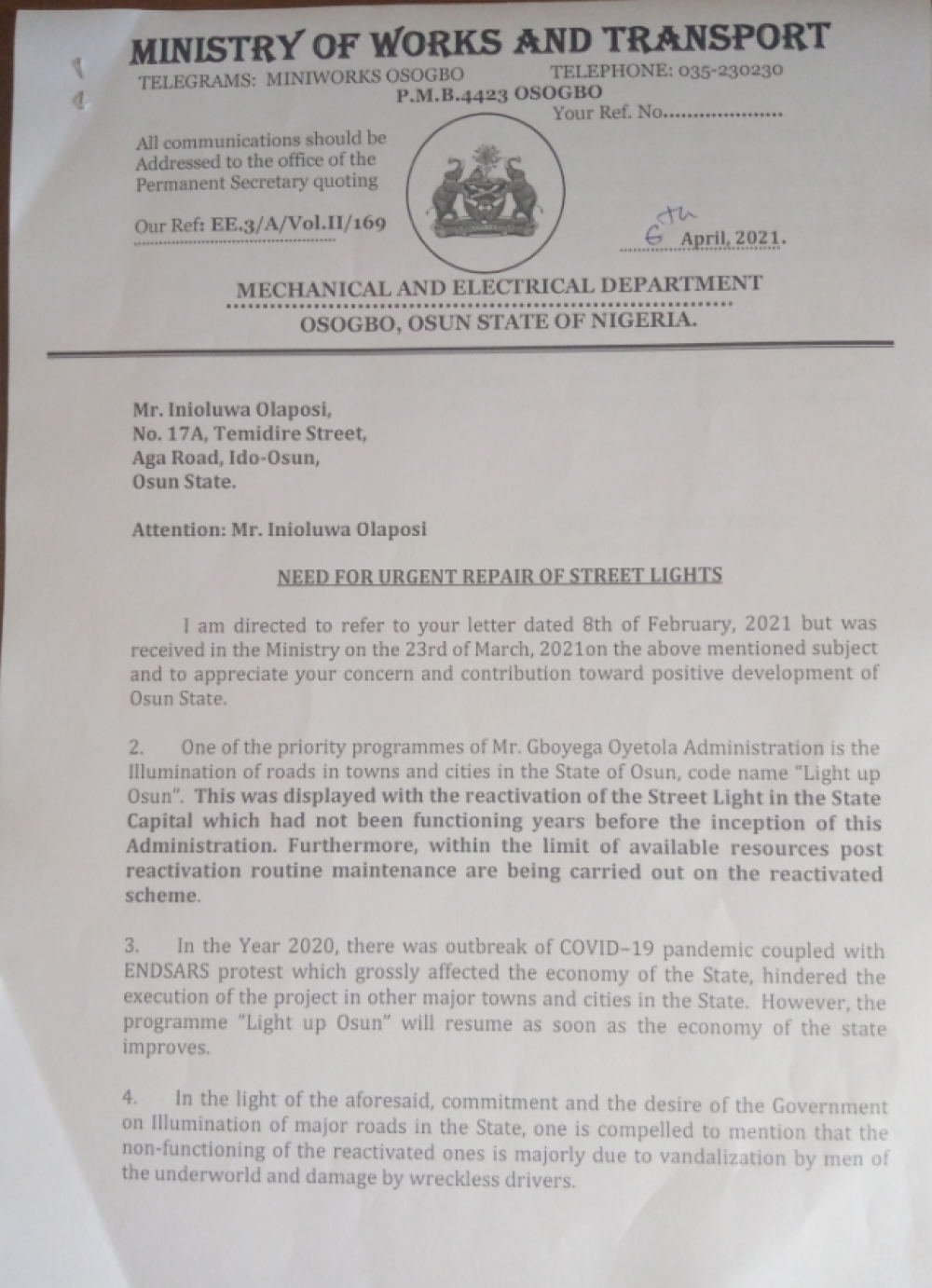 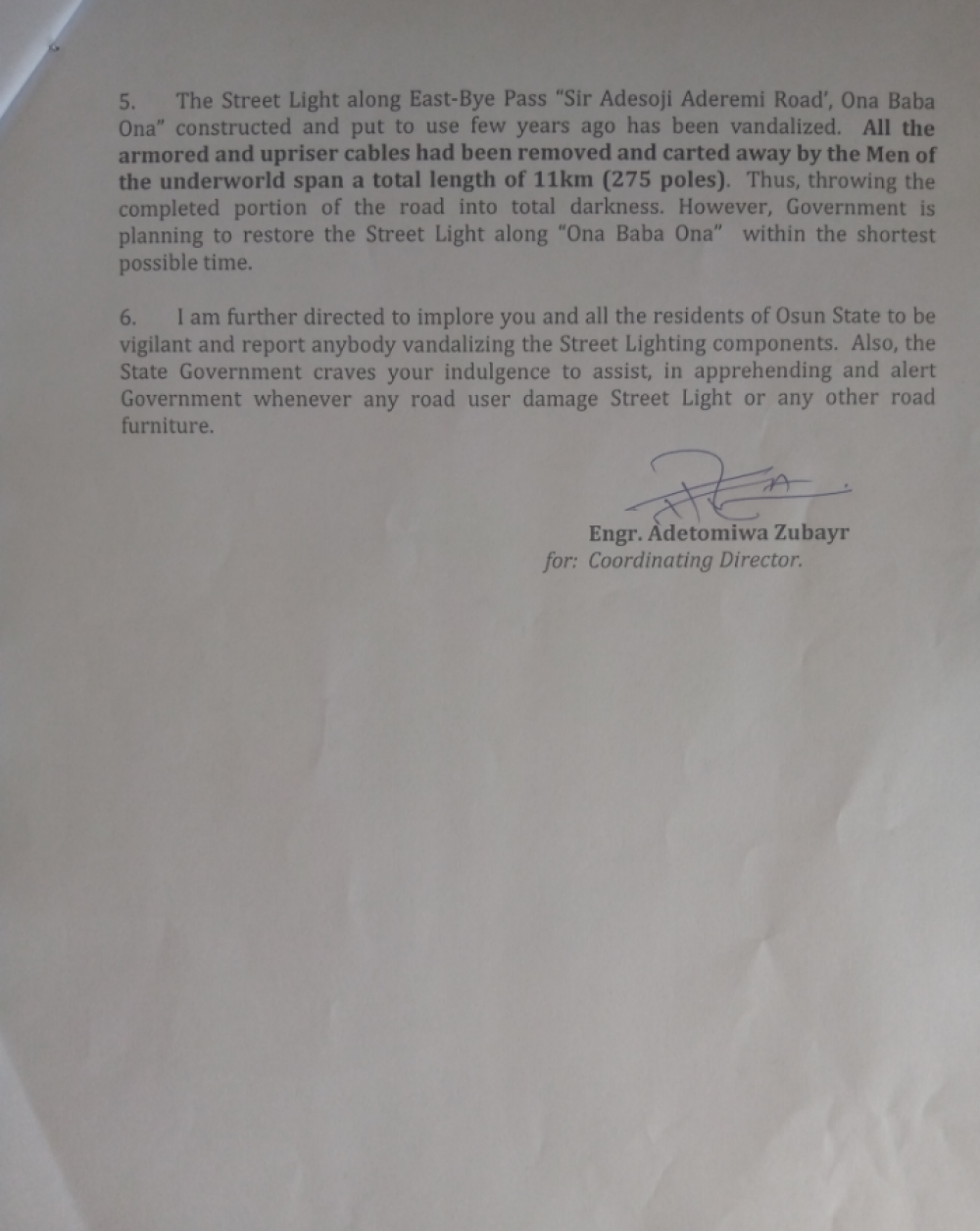 ​​​​Indeed, the path taken by Olaposi is one that more Nigerians should explore if we truly desire for a better nation.

Elected representatives should also be ready to give account for their actions or inaction in providing an enabling environment for their people to thrive.