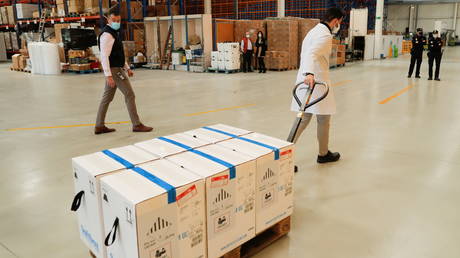 Having shipped at least a billion jabs since the global rollout began in December 2020, the bloc has been the biggest exporter of Covid vaccines, European Commission (EC) president Ursula von der Leyen has announced.

Delivering a statement on Monday, von der Leyen outlined the scale of the EU’s Covid vaccine distribution scheme. It has so far shipped doses to more than 150 countries.

Important milestone reached in delivering #COVID19 vaccines to the world.The EU has exported over 1 billion doses over the past 10 months.Vaccines made in 🇪🇺 have been shipped to over 150 countries.We are the largest exporter of #COVID19 vaccines. https://t.co/E3wddMrPWo

“Very clearly, the European Union is the largest exporter of Covid-19 vaccines,” she stated, marking the bloc’s “important milestone” of having delivered “over one billion” doses in the past 10 months.

The EU has been working to send Covid vaccines around the globe since December 2020, primarily to larger nations, but also to smaller, poorer ones that are vulnerable to the virus.

The milestone has been passed despite the EU having introduced a mechanism that monitors and potentially limits vaccine exports, with the measure being extended from an initial September deadline to the end of 2021.

Also on rt.com
Pandemonium looms for the world as the ‘Everything Shortage’ meets a ‘Dark Winter’ thanks to collapsing global supply chains

Von der Leyen’s statement was made ahead of next week’s G20 summit meeting in Rome, at which she hopes to encourage attendees to support efforts “to beat the pandemic” by joining the bloc in its work distributing Covid vaccine doses to countries that need assistance.

According to the EC, the EU is currently sending at least every second dose produced in the EU abroad. Last month, the bloc agreed to send a further 200 million doses to Africa and to low-income countries. The initiative is designed to bolster global inoculation rates, with data showing less than 50% of the world’s population has received at least one dose of a Covid vaccine.