The Osun State Government has revealed that it has so far reached 210,000 vulnerable households with its Food Support Scheme, using a fair and systematic distribution network.

The state government also said the deployment of the World Bank approved social register has helped ensure that its intervention reaches those for whom it was designed.

Speaking during the flag-off of the distribution of the seventh edition, the Secretary to the State Government, Wole Oyebamiji, called on vulnerable citizens that were yet to benefit from the scheme to exercise patience, adding that they have been  captured in the overall scheme.

He disclosed that the new set of 30,000 beneficiaries from the seventh edition brings the total number of citizens impacted by the scheme to 210,000.

“We are delighted today to start the seventh edition of this scheme. It is indeed another promise kept. When this scheme began, some people thought it cannot be sustained beyond three months, but this is an evidence of the government’s commitment which by God’s grace will be sustained.

“The generality of beneficiaries are delighted, especially with the distribution strategy put in place by the Committee implementing the scheme. It has been fair and systematic.

“We have relied on a social register approved by the World Bank, which has universal acceptability. We are hoping that this could be expanded in the  future.” 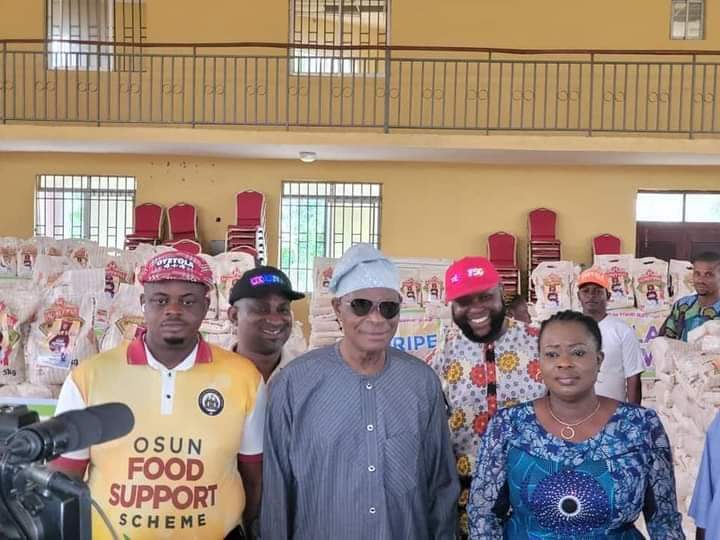 Speaking at the flag-off, the Commissioner for Regional Integration and Special Duties and Coordinator of the Osun Food Support Scheme Committee, Olalekan Badmus while lauding the impact of the programme on citizens and the state’s economy added that the scheme was proof of Oyetola’s inclusive approach to governance.

“This has been a focused programme of the government over the last seven months and the impact on citizens has been impressive. Those considered vulnerable are delighted because they feel remembered by the government, and that is the idea, that no one is left out in the inclusive government of Governor Adegboyega Oyetola.

“We have also tried to patronise our local suppliers to ensure that the economy of the State is impacted.

“This scheme has been part of the Governor’s commitment to impact every sector of the State’s economy. It is part of the social services of the government to the people, which beneficiaries have greatly appreciated and extended words of prayers to the governor as a result.”

Recall that the government of the State of Osun started feeding 30,000 poor and vulnerable citizens across the State, with effect from the month of March 2021.