The Turkish president on Wednesday said his country continues to share “necessary information” on the terror group FETO’s illegal activities in Nigeria.

Speaking at a joint presser with his Nigerian counterpart Muhammadu Buhari in Nigeria’s capital Abuja, Recep Tayyip Erdoğan said: “We are strengthening our cooperation in military defense and security issues with Nigeria, which is fighting terrorist organizations, armed gangs, and piracy.”

Next year, Turkey and Nigeria will celebrate the 60th anniversary of diplomatic relations, Erdoğan said, reminding that Nigeria has been hosting one of the oldest missions of Turkey on the African continent.

He stressed that Turkey is determined to further its cooperation with Nigeria in every field.

Buhari, for his part, said they had “very useful” discussions on several bilateral issues and reached a series of agreements.

Turkey and Nigeria signed a total of seven agreements during Erdoğan’s visit to the African country.

The agreements included one on “Avoiding Double Taxation and Tax Evasion,” and others in the fields of mining, hydrocarbons, energy, and defense, as well as agreements on cooperation on the youth, and the foreign ministries of both countries.

Erdoğan expressed his happiness to visit Nigeria once again after five years, and thanked Buhari and the Nigerian people for their hospitality.

He also conveyed condolences to the loved ones of at least 43 people who lost their lives in a terrorist attack in Nigeria‘s Sokoto state on Monday.

Next year, Turkey and Nigeria will celebrate the 60th anniversary of diplomatic relations, Erdoğan said, reminding that Nigeria hosts one of the oldest Turkish missions on the African continent.

“Being an important member of organizations such as D-8 (Organization for Economic Cooperation), the Organization of Islamic Cooperation, ECOWAS (the Economic Community of West African States) and the African Union, Nigeria is among the leading countries of its region and the world,” the Turkish president said.

“Nigeria’s efforts to establish peace, stability and economic development in the African continent are admirable.”

With the latest visit, Erdoğan said, Turkey is “accelerating its relations with Africa” on the basis of “strategic partnership.” Before Nigeria, he visited Angola and Togo as part of the 4-day diplomatic tour to Africa.

The Turkish leader said he was glad that many young Nigerians are studying at universities in Turkey and the Turkish Republic of Northern Cyprus (TRNC), benefiting from Turkish scholarships.

Buhari said they had “very useful” discussions on several bilateral issues, and reached a series of agreements. 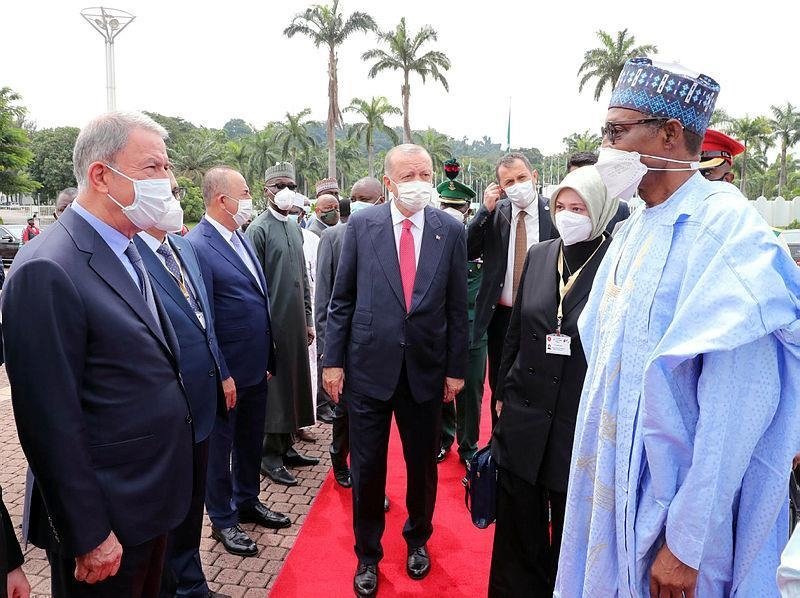 ERDOĞAN WELCOMED IN NIGERIA WITH AN OFFICIAL CEREMONY

Turkish President Recep Tayyip Erdoğan was welcomed on Wednesday by his Nigerian counterpart Muhammadu Buhari with an official ceremony at the Presidential Palace in the capital Abuja.

Erdoğan, first lady Emine Erdoğan, and the Turkish delegation were also welcomed by the honor guard in the ceremony.

Later, the two presidents introduced their delegations to each other.

Erdoğan is also expected to attend an official luncheon given in his honor by Buhari.

The president on Sunday started a four-day tour of three African countries, including Angola, Togo, and Nigeria.

The West African country of Nigeria boasts Africa‘s biggest economy, with a gross domestic product of some $500 billion, according to estimates.