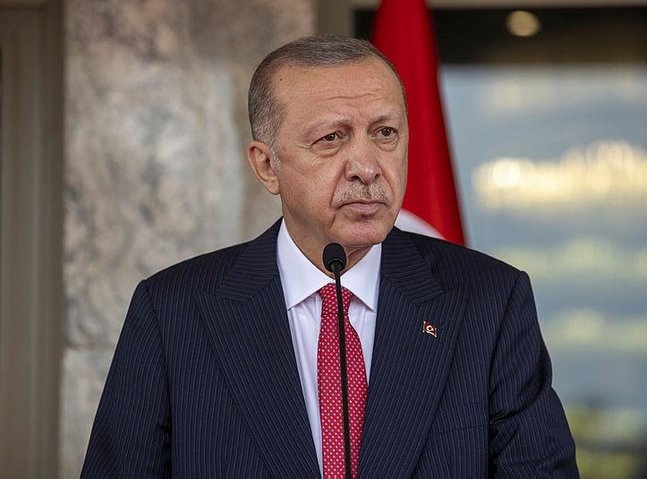 President Recep Tayyip Erdoğan said he believed Turkey and the United States will make progress in talks for the sale of F-16 fighter jets and that Ankara will recoup $1.4 billion it paid for F-35s it is blocked from buying, Anadolu agency reported on Thursday.

Erdoğan said at the weekend that the United States had offered to sell Turkey the F-16s in return for Ankara’s downpayment on the more advanced F-35s, which Washington blocked after Turkey bought Russian missile defences.

“We will get this $1.4 billion of ours one way or another,” Anadolu Agency quoted Erdoğan as telling reporters on a return flight from Nigeria, adding the Turkish and U.S. defence ministers would discuss the issue.

“I believe we will make progress. We will of course talk about this with (U.S. President) Biden at the G20 meeting in Rome.”

Asked about the talks on the issue, Turkish Foreign Ministry Spokesman Tanju Bilgiç said that Turkey and the United States were discussing possibly using the payment for the F-35s to finance Ankara’s F-16 purchase.

“The options for us are simple: we will either return to the (F-35) programme, get the planes, or they will refund our money. In this framework, using the money we paid for the F-35s for the modernisation of the F-16s is on the agenda,” Bilgiç said.

The decades-old alliance between Ankara and Washington has been seriously strained in the past five years over policy differences on Syria, Turkey’s Russian S-400 missile defence purchase, tensions in the east Mediterranean and human rights.

Erdoğan on Thursday severely criticized the ambassadors of the United States, Germany and eight other Western countries who condemned the detention of jailed businessman Osman Kavala.

“I told our foreign minister that we cannot have the luxury of hosting them in our country,” Erdoğan told reporters in comments published by Turkish media.

Ankara on Tuesday summoned the top envoys of Canada, Denmark, Finland, France, Germany, the Netherlands, New Zealand, Norway, Sweden and the US over their irresponsible statements about the release of jailed businessman Osman Kavala, the Turkish Foreign Ministry said in a statement by rejecting the call as “unacceptable”.

“Why would the 10 ambassadors make such a statement? How dare you [try to] teach Turkey such a lesson? Who are you?” Erdoğan said, referring to the diplomats, while charging that the judiciary in Turkey is “independent.”

“Do you release the killers, terrorists in your country? Neither America nor Germany … which of them did such a thing so far?” Erdoğan further charged in remarks to reporters on the plane from his Africa tour.

On his visits this week to Angola, Togo, and Nigeria, Erdoğan stressed Turkey’s efforts to forge common ground with African countries against the threat of the Fetullah Terrorist Organization (FETO), the group behind the 2016 defeated coup in Turkey.

He added that the dozens of school acquisitions by the Turkish Maarif Foundation in Africa are proof that the FETO terror group has been slowly collapsing on the continent.

The Turkish Maarif Foundation, established after the defeated coup to transfer FETO-affiliated schools to responsible administration, has taken over 216 FETO-linked schools in 19 countries, the president said.

Stating that the terror group still has a presence in Nigeria, Erdoğan touched on his meeting with the country’s President Muhammadu Buhari.

Erdogan said they revised bilateral relations between Turkey and Nigeria during the meeting and signed agreements to reinforce the cooperation.

The two leaders also discussed the possibility of Turkey‘s taking over a FETO-affiliated university and a hospital in Nigeria, he stated.

FETO and its US-based leader Fetullah Gulen orchestrated the defeated coup of July 15, 2016, which left 251 people dead and 2,734 injured.

Ankara accuses FETO of being behind a long-running campaign to overthrow the state through the infiltration of Turkish institutions, particularly the military, police and judiciary.

Erdoğan said he discussed bilateral relations and regional issues in detail in his meetings with the leaders of Angola, Togo, Burkina Faso, Liberia, and Nigeria.

In the quadrilateral meeting, FETO was listed as a terror group in an international text specific to Africa for the first time, he said.

In a separate meeting with Gnassingbe, Erdoğan and his counterpart discussed regional issues and the fight against terrorism, and confirmed mutual will to improve cooperation in political and military fields.

Including the official visits he has conducted since Oct. 17, Erdoğan has visited 30 countries in Africa, where he held 41 working visits. Erdoğan said these visits “are a concrete indication of Turkey’s determination to improve its relations with the African countries.”

Erdogan said Turkey‘s vision for Africa “is based on a win-win principle” as it regards Africa “not as a market, but as a partner.”

Criticizing countries for seeing the African continent, not through a perspective of cooperation but interest, Erdoğan said: “We defend an approach built on cooperation, solidarity, shared history, knowledge and experience, rather than on arrogance.”

Turkey‘s concern is not to exploit the region, he emphasized. “They will win and we will too.”

Citing Buhari, Erdoğan said colonial powers had killed a million people in Nigeria, and the French killed another million in Algeria, and 700,000 more in Rwanda. “According to them, you should not reveal these facts, you should not tell,” he added.

“They did not care if the people in miserable conditions there died. All they cared about were the underground resources, which they did not leave there, but took to their countries,” he remarked.