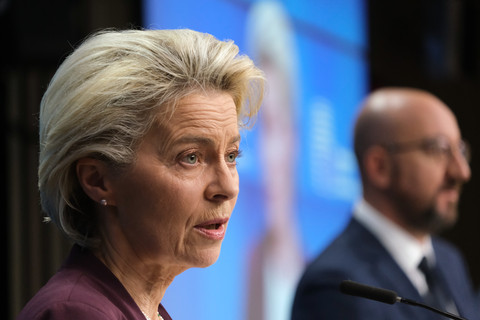 EU leaders agreed to adopt “further restrictive measures” as a matter of urgency and threatened to “respond accordingly” to all hybrid attacks at the EU’s borders.

The ongoing stand-off on Belarus’ borders turned top-level EU political issue was part of wider EU summit discussion on migration. At least eight people have so far died on the Belarus border with Poland, while many others remain stranded in nearby forests.

Border tensions with Latvia and Lithuania are also mounting as Minsk secures more visa-free deals with other third-party non-EU countries, in order to then shuffle people – migrants and asylum-seekers – towards the borders of the EU.

“We will continue our engagement with these countries to limit the state sponsored smuggling,” she said.

German interior minister Horst Seehofer had earlier this week said people from Egypt, Jordan, Iran, Pakistan, and South Africa are among those now able to travel without a visa to Belarus.

He said Moscow, a major economic partner of Belarus, likely holds a key to resolving the conflict. But Russia is also suspected of seeking to destabilise the EU.

The EU instead appears to have taken a hardline approach against Minsk.

Current EU sanctions in Belarus span 166 people and 15 entities, as well as targeted economic restrictions introduced over the summer.

It also banned Belarusian air-carriers after Minsk earlier this year forcibly re-routed a RyanAir flight to apprehend a Belarus opposition journalist. and has stripped people close to the regime of visa-free travel to the EU.

Others voiced some caution on additional sanctions, however.

Belgium had earlier asked EU states to not single out Belarusian potash sector, noting that EU sanctions on Belarusian firm Belaruskali had created an “implementation problem” for EU companies.

“[The] Lukashenko regime now will see that the European Union is able to react, is able to take the decisions, and is ready to defend itself,” he said.

Similar comments were made by EU council president Charles Michel, who accused Belarus of engaging in hybrid warfare.

He said a greater political will and “conversion” to deal with migration both outside and inside the EU borders had emerged among the EU leaders at the summit.

It also means using some €8bn in EU funds, and possibly more, “for actions on all migratory routes”, as well as money towards Syrian refugees in Turkey, Jordan, Lebanon and other parts of the region, including Egypt.

Similar calls had been made by a dozen EU states, earlier this month, which also proposed the EU finance border walls and fences.

But von der Leyen rejected it.

“There will be no funding for barbed wire and walls,” she said.

The EU states, for their part, “agreed to ensure a fair balance between responsibility and solidarity among member states.”

Where that balance lies has yet to be determined.