The Coalition of the Democratic Opposition (COD-2020) in a statement accused Touadera of wanting to lift the immunity of opposition MPs, “thus trampling on the requirement of… the creation of a peaceful climate for dialogue”.

“The regime doesn’t want peace, or the return of security, or reconciliation and especially not a dialogue to bring together the sons and daughters of the country,” said the statement by the COD-2020, which encompasses 12 opposition parties.

“Therefore the COD-2020 has decided… to withdraw its representatives from the Republican Dialogue Organising Committee,” the statement continued. 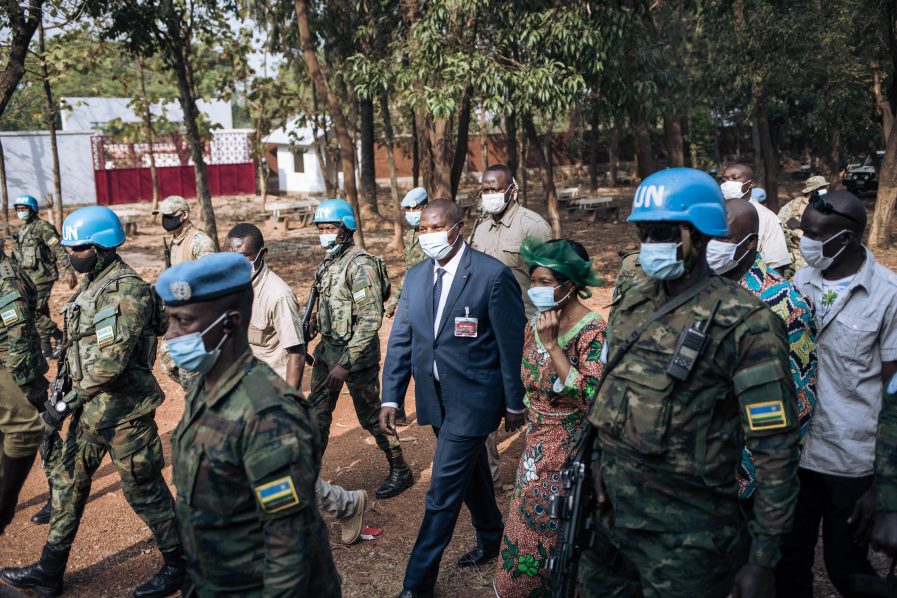 (FILES) In this file photo taken on December 27, 2020 Central African Republic President Faustin Archange Touadera (C) arrives to vote surrounded by Rwandan peacekeepers of the United Nations Multidimensional Integrated Stabilization Mission in the Central African Republic (MINUSCA) and the presidential guard at the Barthélemy Boganda high school polling station in the 1st district in Bangui, Central African Republic (CAR), during the country’s presidential and legislative elections. – A week after the Central African Republic President Faustin Archange Touadera’s surprise announcement of a “unilateral ceasefire” by his soldiers and their Russian and Rwandan allies in their war against the rebels, experts and opposition alike say the truce is not sustainable.<br />The country, which is among the poorest in the world, has been the scene of numerous conflicts since its independence from France in 1960, with the latest civil war, which began in 2013, persisting, even if it has considerably diminished in intensity over the past three years. Yet 13 peace agreements since 2007 and several announcements of ceasefires have never held. (Photo by ALEXIS HUGUET / AFP)

One of the world’s poorest nations, the CAR has repeatedly been wracked by conflict since obtaining independence from France in 1960.

Civil war broke out in 2013 after a coup toppled president Francois Bozize, who had seized power a decade earlier.

While that conflict has dropped in intensity in the past three years, unrest remains rife.

Since 2007, there have been 13 peace accords and a welter of ceasefires but none has held in the long term.

In mid-October, Touadera issued a unilateral ceasefire declaration, vowing to pursue dialogue, and said all but two of the main armed rebel groups had agreed to put down their weapons.

But the president has given no start date for this “republican dialogue” even before Sunday’s announcement.

The three MPs at the centre of the row over parliamentary immunity are Anicet Georges Dologuele, who came second in the December 2020 presidential election, Martin Ziguele, who came third, and Aurelien Simplice Zingas. They have already been notified of a ban on them leaving the country.

A member of the president’s office said the lifting of immunity for these three was being sought as part of investigations into Bozize, the head of state from 2003 to 2013.

Touadera’s government accuses Bozize of being behind a failed attempt to overthrow the president in December.