ROBERT HARDMAN: Beside the Queen in a video call, a photo of Prince Philip in a cloud of butterflies

This might be the greatest gathering of world leaders in years, egged on by tens of thousands of angry activists, imploring them to do a deal.

Yet it was two unelected nonagenarians who stole the show yesterday.

For all the fine words from umpteen presidents, prime ministers and campaigners, none of them nailed it quite as deftly as the Queen. That followed a similar bravura performance from Sir David Attenborough.

Summoning the wisdom which comes with being the longest-serving head of state on the planet, the Queen distilled the monumental task facing this summit into just a few words.

‘For more than 70 years, I have been lucky to meet and to know many of the world’s great leaders,’ she said.

‘And I have perhaps come to understand a little about what made them special. It has sometimes been observed that what leaders do for their people today is government and politics. But what they do for the people of tomorrow – that is statesmanship.’ 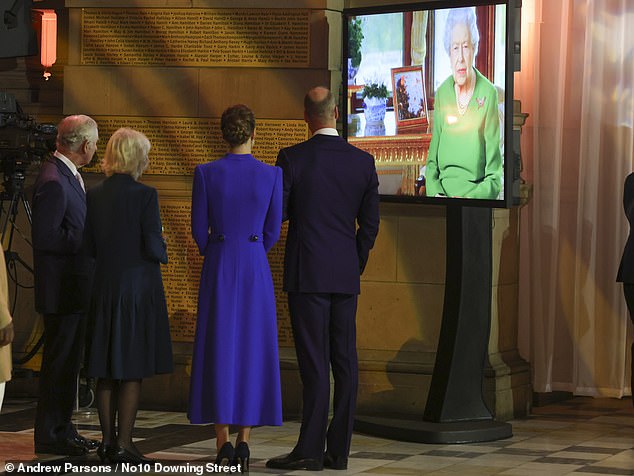 The Cop26 climate change summit in Glasgow was the delegates chance to be ‘written in history books yet to be printed’, the Queen said in a video address

This was, she told them, their chance to be ‘written in history books yet to be printed’. Big words from one who has already been written in to a few herself. But then the Monarch knows of what she speaks.

Though this was a speech she had wanted to make in person until her doctors decreed that it had to be delivered via video, it lost none of its punch. The poignancy of the setting only added to the power of her words.

There she was in the White Drawing Room at Windsor Castle, the same room in which delivered her historic address to a Covid-ravaged nation last year. At her side, was a favourite photo of the Duke of Edinburgh surrounded by butterflies during a 1988 visit to Mexico.

For years, she reminded us, she had watched him nurture a bright idea that turned in to a charity – the World Wildlife Fund – that, in turn, paved the way for so many of today’s environmental organisations.

Between them, the couple had watched their eldest son and his eldest son embrace the same cause.

‘I could not be more proud of them,’ she said. And what was that on her lapel? Her much-loved butterfly brooch. Gulp. The Prince of Wales had been among the star turns at the grand summit opening ceremony. 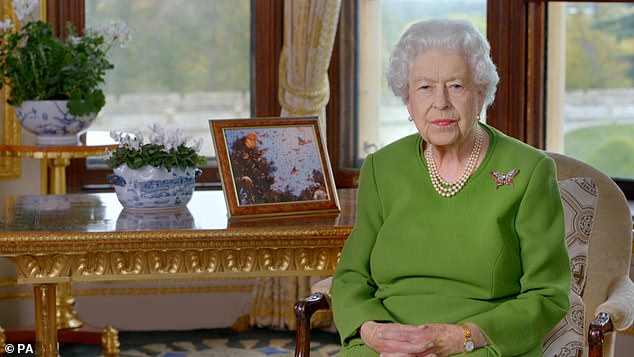 Her doctors decreed that her address had to be delivered via video, from the White Drawing Room at Windsor Castle with a favourite photo of the Duke of Edinburgh from 1998 at her side

He appeared in the huge plenary conference hall after what he acknowledged was called a ‘terrifying’ film of people being plucked from floods, bushfires and other climate-induced horrors.

‘Any leader who has had to confront such life-threatening challenges knows that the cost of inaction is far greater than the cost of prevention,’ he said as he urged the assembled to adopt ‘a war-like footing’.

The aura around the Prince really has now morphed from well-intentioned pioneer to revered elder statesman of climate change. He will be at this summit all week, long after most of the world leaders have flown home.

Looking on as the Prince spoke yesterday was the US President.

Joe Biden occasionally betrayed signs of jet lag during the day, letting the eyelids drop and later telling us how pleased he was to be in somewhere called ‘Glass Cow’.

At least he had the courtesy to arrive in good time for the opening ceremony and sit through the whole thing. That was more than could be said of some.

National delegates are seated in alphabetical order here. Bizarrely, three seats alongside him were empty.

Uruguay, Uzbekistan and Vanuatu had not turned up, thus missing a plum opportunity to have a chat with the most powerful man on Earth. So, as we waited for the ceremony to start, other leaders came scuttling across.

Emmanuel Macron must wish he had not left it to the last minute to stride in fashionably late. He made a beeline for Mr Biden and had only just started his shoulder-slapping routine when the lights went down and he was told to take his seat.

This ceremony might have been devised by a Conservative government but it felt more like an old Tony Blair production. It was overflowing with youth and diversity.

A young woman from the South Pacific took to the stage, as did a woman from the Amazon basin, as did another from Kenya, as did Yrsa Daley-Ward, a poet of Jamaican/Nigerian heritage and raised in Chorley, Lancashire.

Set against this ensemble, Boris Johnson looked pale, male and stale as he delivered his speech. It was primarily an earnest call to arms but sprinkled with ruminations, bumblings and the odd joke. 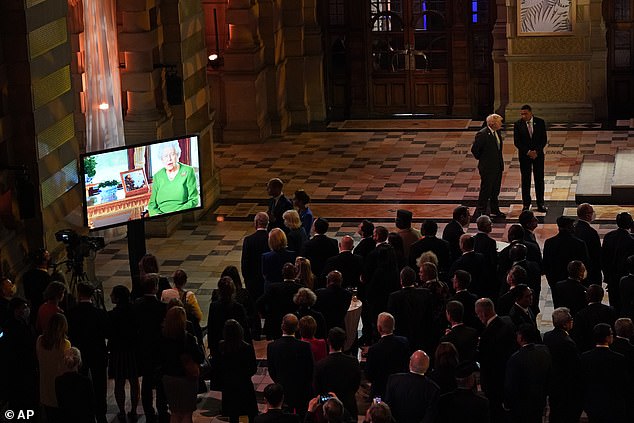 The aim was to blend the catastrophic with a glimmer of hope. The serious stuff worked well enough. The humour, it must be said, went over delegates’ heads faster than the Atlantic breeze whistling up the Clyde.

Mr Johnson welcomed everyone to Scotland ‘whose most globally famous fictional son is almost certainly a man called James Bond who generally comes to the climax of his highly lucrative films strapped to a doomsday device desperately trying to work out which coloured wire to pull to turn it off while a red digital clock ticks down remorselessly to a detonation that will end human life as we know it…’ Hmmm.

Not a bad analogy but I spotted not a ghost of a smile in my part of the auditorium.

Then the PM pressed the button marked, ‘no, but seriously, folks’ as he went on: ‘It’s one minute to midnight on that doomsday clock and we need to act now.’

What really rammed the point home, however, was Sir David Attenborough. With the vigour of a man half his 95 years, he bounced on to the stage and delivered an absolute belter.

With no notes, he acknowledged that ours is the first generation which has seen the settled pattern of the seasons give way to atmospheric mayhem.

We are in a dire state, he admitted, but rounded off on an upbeat note, declaring: ‘In my lifetime I’ve witnessed a terrible decline. In yours, you could and should witness a wonderful recovery.’

It was Joe Biden who led the standing ovation. Afterwards, world leaders were scrambling to pat Sir David on the back.

The poor chap had just reached the door when he was grabbed by Scottish First Minister, Nicola Sturgeon, for a selfie. Sir David was too much of a gent to refuse. Sure enough, the First Minister posted her snap moments later.

On a day when we learned what it takes to be statesmanlike, that, most definitely, was not.