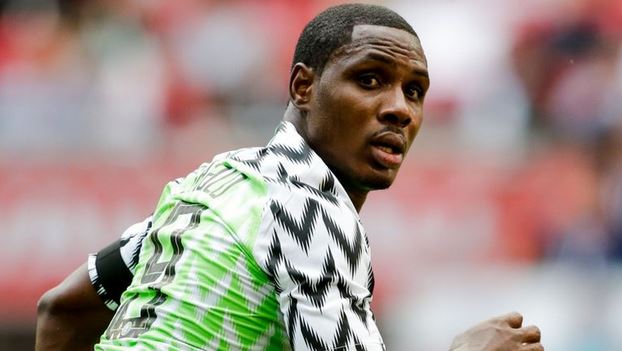 Rohr named Ighalo in his 24-man squad for the 2022 World Cup qualifiers against Liberia and Cape Verde later this month.

Ighalo called it quits with the Eagles July 2019 after emerging top scorer with five goals at the African Cup of Nations in Egypt, where the Eagles ended in third-place.

Ever since, Rohr had continually stated his desire to have Ighalo back in the team to lead his attack.

President of the Nigeria Football Federation, Amaju Pinnick, gave the hint that Ighalo might make a return to the national team on October 25.

In a post on his Instagram page, Pinnick said he had appealed to Ighalo to make a U-turn and reconsider his international retirement.

“I had a long conversation with Odion Ighalo, personally I believe we need experience in our attack to combine with our energetically youthful (Victor) Osimhen, (Paul) Onuachu, Kelechi (Iheanacho) et al. Odion’s (Ighalo) body language is very positive. We are also in touch with his agents and club,” Pinnick wrote on Instagram.

The NFF boss’ comment sparked a debate online, with many insisting the 32-year-old’s time with the national team was over.

There was, however no place for Taiwo Awoniyi, who made his international debut in the 1-0 shock loss to Central African Republic in Lagos last month.

Bordeaux’s Samuel Kalu is also a shock exclusion from the squad.

Also missing out from the last round of qualifiers is Glasgow Rangers’ Calvin Bassey, who failed to make his international debut in the qualifiers last month, after he was handed his maiden international call-up.

Samuel Chukwueze, who just returned after he was injured in May, also makes a return to the team, while Alex Iwobi and Wilfred Ndidi, who missed the double-header against CAR due to injuries, reunite with their teammates.

Other regulars including captain and Nigeria’s most-capped player Ahmed Musa, William Troost-Ekong, Victor Osimhen, Kelechi Iheancho and Leon Balogun are in the squad.

The Eagles play the Lone Star of Liberia at the Grand Stade Tangier in Morocco on November 13, before flying to Lagos for the final group game against Cape Verde at the Teslim Balogun Stadium, Lagos, three days later.

Group winners will proceed to the final round of qualifiers involving 10 teams who will be paired in twos, with the winning five teams qualifying for the 2022 World Cup in Qatar.