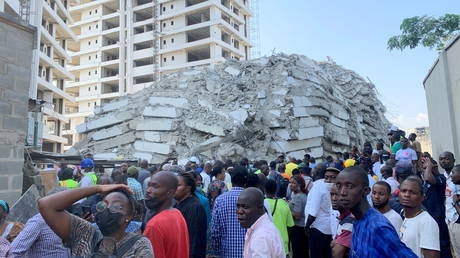 A multi-story building under construction has collapsed in Lagos, Nigeria, with the structure reduced to a pile of concrete. Local officials have confirmed at least four deaths in the incident, while dozens are feared trapped.

The incident occurred on Monday in the affluent neighborhood of Ikoyi. An unknown number of construction workers are believed trapped under the rubble, with a local official from the National Emergency Management Agency confirming that four people have died and a further four have been rescued alive.

Some 100 people may have been at the site when the building went down, two construction workers there told Reuters.

Footage from the scene shows the affected building has collapsed into its own footprint.

Literally saw my life before me. A 12-storey building in Ikoyi collapsed before my eyes. A reminiscent of the 9/11. I don’t think I’d be alive to tweet this if it were the one closer to our window. Our office was vibrating as the building was collapsing.Alhamdulillah! pic.twitter.com/qwEKyBgBxK

Local emergency services have said they are responding to the incident, with rescuers already deployed to the site of the collapse.

“All first responders are en route to secure the scene, while the heavy-duty equipment and life detection equipment have been dispatched,” the head of the local emergency services, Olufemi Oke-Osanyintolu, told Nigerian media.

According to conflicting local reports, the building measured between 17 and 25 floors high, though it was not immediately clear how many were actually constructed. Shortly before the collapse, structural columns broke on one side of the building, prompting the disintegration of the whole structure, Lagos media reported citing eyewitnesses.

Imagery circulating online suggests the collapsed structure was a part of a larger project, with another unfinished building seen in its immediate vicinity.