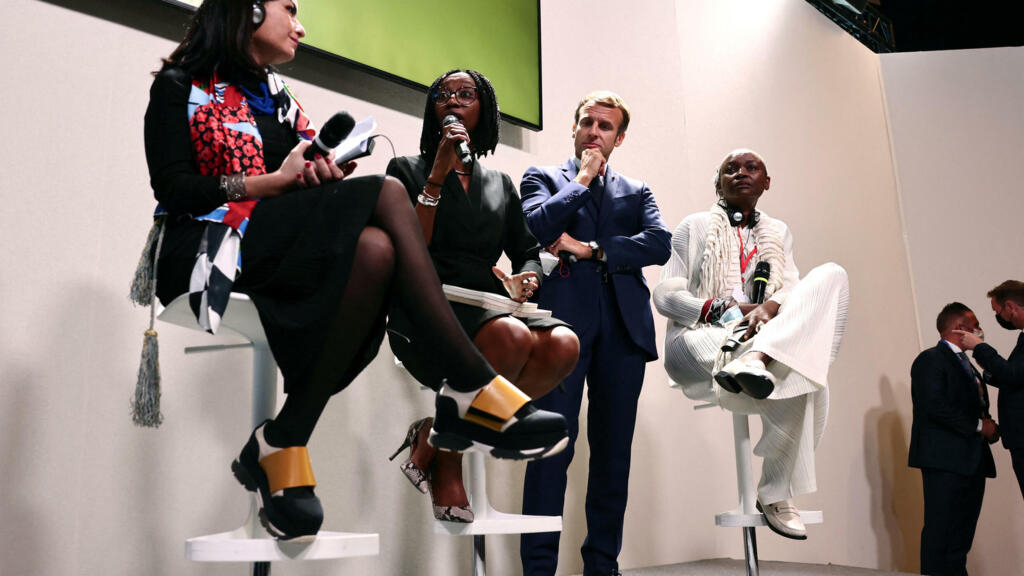 A roundtable discussion on the French restitution of African art in its museums created a stir at the Africa-France summit on Friday, culminating in an appearance by the French President Emmanuel Macron, who spoke of “going forward from the wounds of the past to look towards the future.”

Various panelists from different museums in France, including the top ethnographic museum, Quai Branly, spoke at the summit in Montpellier, as well as Cameroonian curator Koyo Kouoh, director of the Zeitz Museum of Contemporary Art Africa in Cape Town, South Africa.

“Africa has been in a forced marriage with France for at least 500 years,” Kouoh told Macron when he spoke during the art restitution topic, adding that while a discussion was welcome, the timing in respect of Africa-France relations was very late.

Some of the most pointed criticisms came from young Africans in the diaspora who live in France.

A group of youths from Alter-Natives, a Paris-based organization that questions the role of cultural heritage, and opens the discussion on diversity to make museums more inclusive, spoke to the audience.

“Eighty percent of Africa’s cultural heritage is outside the continent— I can’t see any of the objects of my people,” said Mohamed Loum Gning, 19.

Although they come from, or have origins in, the African continent, the plunder of African heritage at school here in France was not part of their curriculum.

Zoul Iscandar, originally from the Central African Republic, said that there was a tendency at school and in French society to think that Western culture is more important than African culture.

“Our history is scattered,” he said. “I want to see African objects in Africa so that the youth on the continent can be proud of their history. Of course, our ancestors aren’t here anymore and can’t testify as to what happened (in the past),” added Iscandar.

Manasseh Agbonlahor, a youth delegate from the ancient city of Benin, in Edo State, Nigeria, spoke to RFI about how objects that remain in Western custody do not help discussion of African history.

“It’s obvious that whoever the conqueror is, they write the history of our conquered territory. The world has been given another narrative of what Africa is, and it’s important that the French government begins to change the narrative on Africa,” said Agbonlahor.

On the sidelines of the panel, Oluwatoyin Sogbesan, a Nigerian cultural historian and architect, told RFI that she believes pieces like the iconic Benin bronzes are important, but it’s the everyday objects such as calabashes, fish baskets, and spears that need to be given  back. Furthermore, the often-used argument that African countries are not equipped to deal with artifacts is not valid either, she said.

“Where were the objects before they were collected, stolen or pillaged? They were with Africans, Africans know how to use these objects, they are not just art objects, they are objects that represent culture, identity and history,” said Sogbesan.

Depriving an African audience of these items leaves them without history, she maintained. “They are completely alienated from what represents them or what can be shown to their children,” she added.

The whole concept of a museum as a place to look at artifacts under glass boxes is a colonial concept, when the African definition of museum predates anything in Western culture, according the Nigerian expert.

“You have your own museum within your home, with African relics, that is about your family and where you’re from, what you do, what you worship,” she said. The second African concept of museum relates to the display of the public shrine that you only see when you go worship.

And thirdly, the palace, where the king would display the wealth of the people.

“The idea of museum in this sense is not new to Africa– we always showcased what we had in one way or the other. But having a building locked up with glass cases to show an artifact is not the way Africa would show theirs,” she added, explaining that the West’s whole philosophy for museums goes against how such relics would be displayed on the African continent.

Nevertheless, there are some efforts underway in France and in Europe, to tackle the question of restitution. These efforts, however, face challenges in establishing the origin of some of the items.

“We had no archive before—we didn’t know where they got them, there were no documents. What we’re trying to do is find out the provenance of the objects with four other museums in France,” said Emilie Salaberry, director of the Angouleme Municipal Museums in France.

Attitudes and perspectives are changing, according to Barbara Plankensteiner, director of the Rothenbaum Museum in Hamburg, and member of the Benin Dialogue Group of five German museums working directly with their Nigerian partners, including Edo elders, the ministry of culture in Nigeria. The Benin works, the second largest in Europe after the UK, will be returned by the end of 2022.

She maintains that when the working group began in 2010, there was not a lot of discussion regarding art restitution. But things have changed. “It’s not a political agreement, not part of discussions in society or ‘permanent loans’ but a change in climate with African intellectuals, youths and others on the African continent calling for the return of artifacts,” she said.

Meanwhile, President Emmanuel Macron announced that France would return the “Treasures of Béhanzin”, works that were looted at the Royal Abomey Palace, in what is now Benin, in 1892 during the colonial wars.