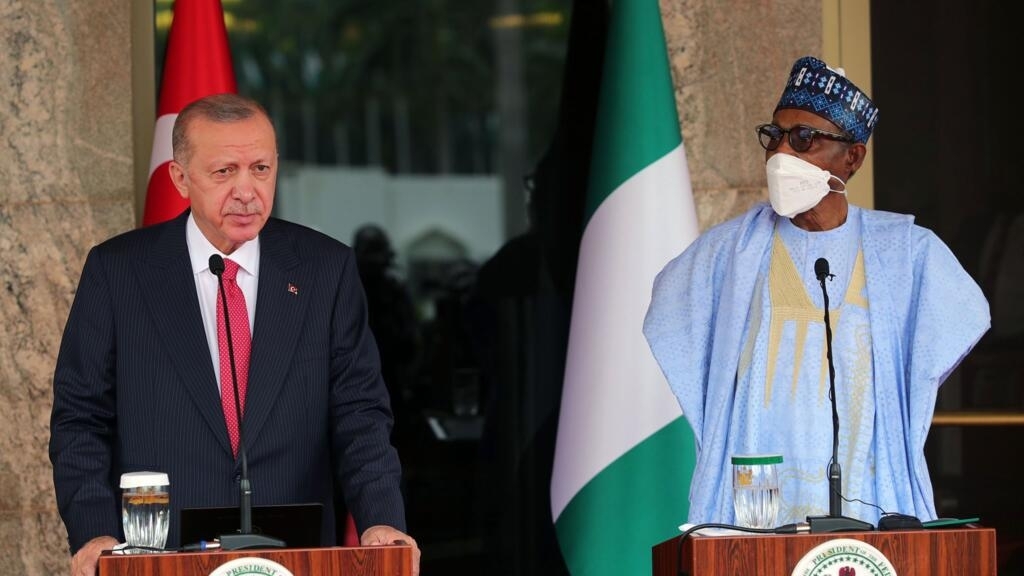 Turkish president Recep Tayyip Erdogan’s four-day visit to Africa this week has put Ankara’s policy on the continent under the spotlight again, as Turkey positions itself as an alternative ally for African countries.

The visit was part of a bid by Turkey to break the economic hegemony of former colonial powers such as France, and to counter the rising influence of China on the African continent.

Erdogan’s trip to Angola, Nigeria and Togo has been an opportunity for the Turkish president to build on Ankara’s desire for a partnership with African economies.

It also gave him a chance to highlight the injustices of traditional players’ failures in dealing with Africa.

In the Angolan capital, Luanda, Erdogan underline post-colonial grievances in an address to the Angolan parliament: “The fate of humanity cannot, and should not, be left to the mercy of a handful of countries that were the victors of the Second World War,” he declared.

Turkish ambitions in Africa have been on hold since the fall of the Ottoman Empire and the country’s subsequent focus on Europe following World War 1.

This was not lost on the Turkish president who describes Turkey as an “Afro-Eurasian state”.

Ahead of his many visits to Africa, Erdogan’s spin-doctors expend a great deal of time and effort underlining the strong historical ties between the Ottoman Turks and African kingdoms, emirates and communities.

This was something that was picked up by the Nigerian military upon his arrival in Abuja this week.

The Ottoman Empire, and Empire Kanem-Bornu Empire rekindle their long lost romance that dated hundreds of years. Yes. A treaty of friendship and trade between the Ottoman and Kanem Bornu Empires was signed between the two states in 1555-1556. pic.twitter.com/RT8WulKUTM

When the ruling AKP came to power in 2002, it marked the opening of a new chapter for Afro-Turkish relations which saw Ankara declaring 2005 “The Year of Africa”.

During Erdogan’s two decades as Turkey’s premier, he has already visited 30 African countries – more than any non-African leader.

As Turkey aims to assert its position internationally, Ankara’s multifaceted gambits have not gone unnoticed.

Franco-Turkish diplomacy is trying to reboot after almost five years of political and personal acrimony between French president Emmanuel Macron and Erdogan. Whether the spread of Turkish influence in West Africa as Paris watches has an impact on this remains to be seen.

In the past 10 years, trade between Senegal and Turkey has increased 16-fold, with massive infrastructure projects changing the skyline of Dakar.

This summer, Niger signed a tactical cooperation agreement that gives Turkey a military presence in the country, while this week’s visit to francophone Togo was all about cooperation in the field of defence.

Paris has claimed that Ankara’s peddling of the “Turkish Model” brand is done to the detriment of France’s ties in West Africa by playing on post-colonial resentment. But that “resentment dollar” goes a long way, especially in Françafrique.

The recent nose-dive in Franco-Malian relations over a potential deal with the Russian mercenary group Wagram to engage in counter-insurgency operations is a case in point.

In his recently published book “A Fairer World is Possible”, Erdogan tells the reader: “We need to join hands for a just world. We must not be afraid. If we fear, persecution will encircle Africa.”

However, it is more than that. It’s Erdogan’s fears that have propelled his “soft power” drive on the African continent.

Since the failed 2016 coup attempt in Turkey, Erdogan has crushed anyone with suspected military or intellectual links with Fethulla Gülen, the exiled islamic scholar Erdogan believes was behind the plot.

Up until 2014, Gülen’s organisation of NGOs, schools and business networks were the main intermediary between the African continent and Turkey.

Since 2016, Erdogan has actively pressured African leaders to dismantle all links to Güelinist institutions and implement indirect government control, under the auspices of the Maarif Foundation, which also runs the Yunus Emre Institutes – Turkey’s equivalent to the Alliance Française cultural centres

President Erdogan is gearing up for this week’s Turkey-Africa Economic and Business Forum, with an Africa tour designed to capture trade and influence on the continent. Here’s what to expect from the two-day conference in Istanbul. https://t.co/rQuQProfeH

Turkey’s role in the conflicts in Libya and Ethiopia could be revelatory in the game Erdogan hopes to play in the region.

Ankara is the second largest investor in Ethiopia after China, with Addis Ababa expressing an interest in procuring Turkish drones in its fight against an insurgency in the coutry’s northern Tigray region.

In Libya, Turkish-backed troops repelled the 2019 military offensive on Tripoli led by renegade general Khalifa Haftar, turning the tide of the civil-war in favour of the UN-backed administration.

Also worth noting is that within less than 20 years, Ankara’s trade volume with Africa has increased five times over, from €3.5 billion in 2003 to €20 billion in 2020.

Since 2009, Turkey has opened 31 new embassies on the continent, bringing the total of Turkish diplomatic missions in Africa to 43. Turkish Airlines is also now a major player in Africa, serving over 60 destinations, making Istanbul a hub for intercontinental travel.

Erdogan’s visit this week comes as a Turkey-Africa Business Council meeting kicks off on Thursday in Istanbul. In December the 3rd Turkey-Africa Partnership summit will showcase Ankara’s overtures to become the alternative external player on the African continent, pushing soft power with a hard agenda.